So on September 5th I loaded up two checked suitcases (one of which was expensively heavy...ouch) and my fully packed carry-on luggage to head to Italy for my new job.  Left Wilkes-Barre and promised my mom that we would Skype (and that my brother would show her how to use Skype).  Wilkes-Barre--> Philly flight was fine.  Philly to Munich flight was fine- slightly delayed, too crowded, and I was stuck in the very back row in a seat that didn't recline all the way, but they did have my vegan meal.  Yay!  Landed in Munich and went to pick up my Lufthansa boarding pass for the last leg (Munich--> Trieste) but that flight was canceled.  So I stood in line for a good 20 minutes to figure out Plan B.  Turns out the flight was canceled because Italy was on strike in the afternoon.  I was on standby for a flight that arrived 4 hours later and definitely booked on the last flight that arrived 8 hours later than I originally planned.  I was tired, sleepy, and didn't smell particularly good.  I camped out at various places in the airport and drank free coffee.  Munich doesn't have free wireless (though I swear the last time I was there it did because I was chatting on facebook with various other people about the Munich airport).  This delay really hampered my plans which involved a carefully planned meeting with my new landlord (who does not speak English).  Luckily, the people in the SISSA lab helped out by calling my landlord and rearranging my plans and hiring a cab to pick me up at the airport :)  Success!


Day # 1: Alissa fills out paperwork
On my first day here I went up to SISSA to start to fill out my paperwork.  I hopped on the bus which takes a twisty road up to the top of the very steep hill.  Unfortunately, when there are too many people on the bus, it can't quite make it up the steep hill and starts to roll backwards down the hill.  That was fun.  So a bunch of us get out and walk to the top of the steep hill before getting back on the bus.  Apparently, this is not really uncommon???

I finally make it to SISSA and start on my paperwork adventure.  I go to Office # 1 and fill out paperwork.  I go to Office # 2 to fill out paperwork.  Then I have to go back downtown to Office # 3 where I fill out more paperwork.  Then back to SISSA for lunch and return to Office # 1 to give photocopies of the paperwork from Office # 3 to Office # 1.  Then to Offices # 4 & 5 to try to get my SISSA login and password set up (side note: it didn't work).  Then downtown to Office # 6 to get my permit of stay.  That's in the post office, which I was told was right down the street from the last bus stop.  I walk down the street see the big sign that says it is the post office but it looks shady and I think there are signs telling me to not go in.  Luckily, I can't understand those signs and I go in anyway.  Oops.  I found the service entrance to the post office.  Luckily some nice guy takes me to the right spot.  He is impressed that I am from Chicago, which makes him the second Italian I've met who is really impressed by this.  I'd tell him I'm from Wilkes-Barre but I don't know if they really watch the Office here.  Anyway, I wait in line and the woman hands me a mountain of paperwork.  It's all in Italian.  If I want help filling it out there is an office like 3 blocks away that can help.  I forgot my map at SISSA and get lost.  I finally find Office # 7 but it's closed.

I give up for the day.  Nap time.  After a nice, comatose-like nap, I wake up somewhat disoriented and figure I should go to the grocery store.  I wander around for a while and figure out where everything is.  I like things that have labels in English :)  They are few and far between.  It's hard to figure out which things have milk products in them.   I bought a bunch of things, though I doubt I could actually make a full meal out of my items.  I was a bit hodge-podged in my selection.  I couldn't find any non-dairy ice cream, which I will make my task for another day.  People warned me that peanut butter would be expensive: 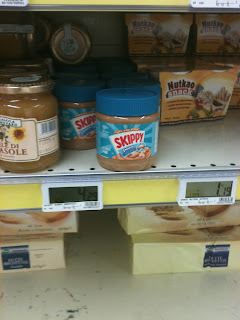 That's 4.29 Euros for a tiny jar of pb!  I know what I'm bringing back from the US next time.  Also, there were no frozen Amy's burritos :(  Probably for the best though, frozen burritos aren't really good for you, even Amy's.  But I really do like them.  I also didn't find any jars of pre-made thai curry mix that I often just eat with some frozen veggies and tofu mixed in.  Or rice.  Well, there is rice, but no instant minute rice and I somehow manage to burn it every time I try to make it myself.  Even if there was minute rice, I don't have a microwave.  I appear to have some sort of newfangled toaster oven.  I guess I will be forced to improve on my cooking skills :)
Stay tuned as I keep trying to get my permit of stay, a cell phone account, and a bank account (among other things).
Posted by Alissa at 1:12 PM